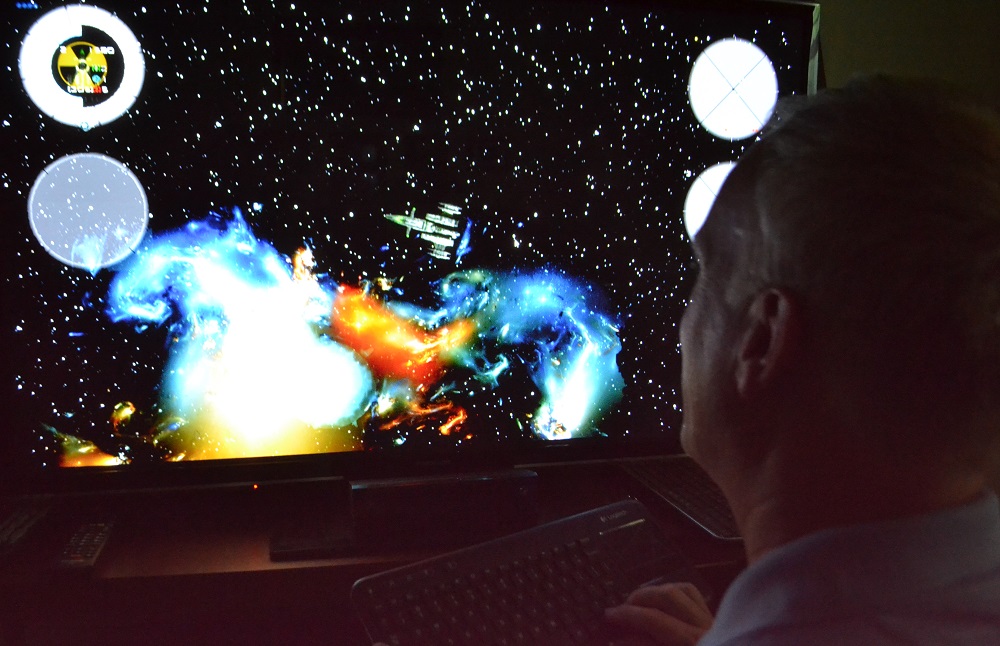 Clifton Park, NY – July 1, 2014, Mike Haley, CEO and founder of Squiggout Studios has released ‘Photon Phighter Origins’ a modern, 1980’s arcade-style video game that salutes what made classic video games like Asteroids, Star Gate, Defender, and Galaga, popular with story lines and point systems that appeal to modern gamers, without the gratuitous violence, blood and gore dominant in so many games.

As an indie game developer, every aspect of this zero gravity game, from the graphics to the sound effects and music tracks was created by Haley, tested by his teenage son and then released to game testers before release.­­­

“I have always measured the enjoyment of a game by how I felt playing video games of the 1980’s, when we didn’t need violence and gore to have fun”, explains Haley, “so, I wanted to create a game that was fun, challenging, and didn’t require an “R” rating, or parental supervision.”

A space adventure set in the year 2091, ‘Photon Phighter Origins’ integrates fantasy, survival, spaceship dog fights, a progressive points system and a complex story line to create a competitive game that challenges the mind and rewards skill. Users are immediately challenged with a test-flight of FTL, a new spaceship drive system that will enable humans to freely explore the Milky Way Galaxy. Gamers are then challenged to “hack” alien technology to stop the Backerrah who conquer worlds to build their food supply (which just happens to be humans). Points are earned from spaceship battles, saving Earth, rescuing other pilots, capturing aliens, solving the mysteries and overcoming the wide variety of unexpected obstacles that unfold along the way – or shooting at asteroids if that’s what you want to do.

‘Photon Phighter Origins’ is a top-down, physics driven arcade-style game currently available for play with keyboard or virtual joystick controls on Windows XP and 7, with Windows 8, Android and iOS versions of the game in production. Haley redesigned the game just months before release to integrate game tester feedback. Hundreds of gamers have downloaded the game since its release just days ago.

Squiggout Studios has designated 30% of all proceeds from game sales for donation to the Make a Wish Foundation. “Watching the difference Make a Wish made when a friend’s child became ill has inspired me to support their effort to help more families,” explains Haley.

‘Photon Phighter Origins’ is rated ‘E’ for Everyone and is currently available for sale for $3.99 on IndieGameStand.com  and Desura.com .