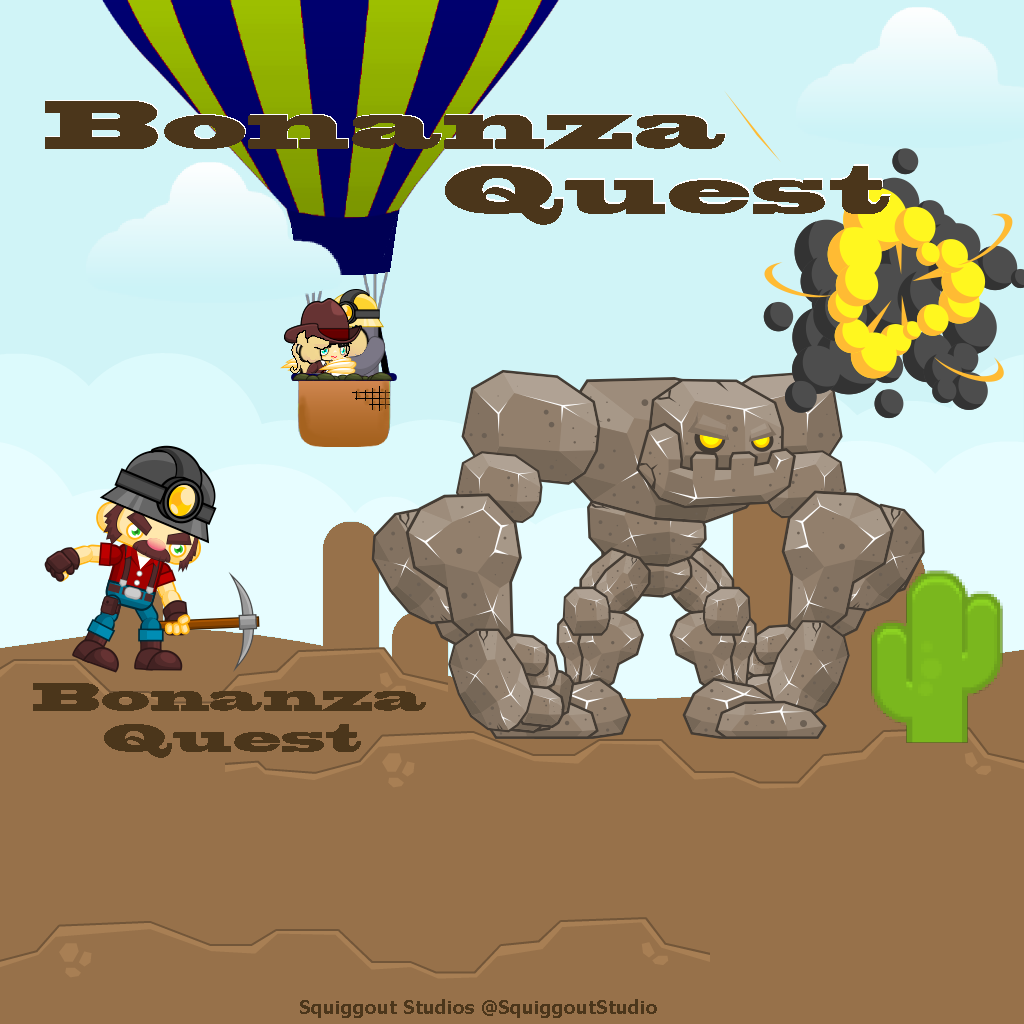 Your sweet girl friend is kidnapped by the Mole King of Vulture Mine. To get her back you must venture in to Vulture Mine and collect a bonanza of bounty to pay the ransom. Every jewel collected is one step closer to your reunion.

37 addictive levels, 6 boss levels and 1 epic battle with the Mole King that will take you awhile to figure out.

Miner Mike is livid that his girl was kidnapped and brings along an Ax and a healthy swing. The Mole King has a plan of his own to marry Mike’s girl and keep the bounty for himself. The mine and surrounding areas are filled with the Mole King’s minions!

Goober Spitting Snails, Boulder throwing Rock Guards, Dynamite dropping Vulture and Bat Air Force, Giggling Rodents, Enchanted spike balls on a chain and bouncing exploding Lava balls. One of the many reason Miner Mike wears a mining helmet but it also helps protect against the massive smashing Rock Giants that guard the mine.

Bonanza Quest is a classic platform game with many game play mechanics. It uses advance physics and mathematics for life like movement. Physic suspension bridges you jump on like a trampoline and many element like lava, ice, trampolines, ropes, and chains to slow you down. Plus apple pie!

Act one- Picnic Peril: The Mole King steals your girl while on a picnic…

Act two- Dynamite Crisis: The Mole King’s Vulture Air Force drops dynamite while you try to get to Vulture Mine

Act Three- Jeopardy at Vulture Mine:Vulture Mine is a dangerous place the deeper you go the less chance you have to see the sun again.

Act Four – Moon Over Gulch Valley: The ghost town of Gulch Valley sits on top of Vulture Mine. Explore the town for clues to were the Mole King has hidden your girl.

Act Five- Return to Vulture Mine. You need to go deeper, until you see lava! Find the Mole Kings under ground Castle and venture inside.

Act Six- Escape from Vulture Mine. You must use the Mole Kings elevator to get your girl to safety. The elevator is designed for a mole so only one person can ride to the top. You must play from the bottom of the mind to the top.

Act Seven- A Kiss in the Sunshine. End of the game or just the beginning of a new chapter. See Expansion Pack One